Success in advertising means people get excited about your brand. Today we’ll show you an example of a company that’s very successful at this for many years and how we can demonstrate this using mood state analysis via BuzzTalk.

Analyzing a BuzzReport for Coca Cola we noticed an emerging pattern in November for mood state ‘tension’ which reached it’s top in week 46 then declined. The following graph represents Tweets mentioning Coca-Cola and the most prominent mood state ‘Tension’: 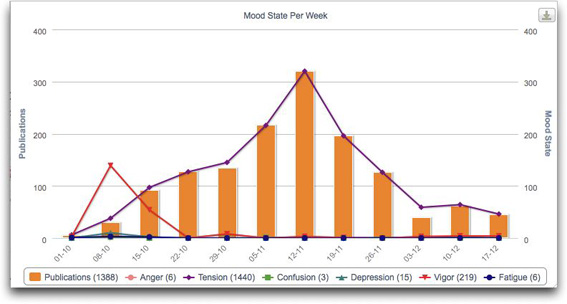 Tension is a mood state related to anxiety and excitement. It here indicates people are actually excited about Coca Cola. But why this sudden rise?

When you’re using BuzzTalk you can follow Twitter hashtags as a dynamic animated word cloud in time. Each hashtag is clickable to review the underlying publications. When we explore hashtags for Coca Cola we find #christmasiscoming #xmas #excited #christmas #holidaysarecoming etc. Below you see a snapshot of the hashtags used in tweets about Coca Cola on 13 November. It so appears the excitement is about the Coca Cola commercial signposting the start of the holiday season.

Mood states are long feeling emotional states. The most widely accepted method of classifying mood states is the Profile of Mood States (POMS) which was developed by McNair, Lorr and Droppleman, originally employed as one of several psychological inventories designed to assess a person’s state of mental health. POMS measures 6 different mood states: vigor, depression, confusion, fatigue, tension and anger.

BuzzTalk can detect these mood states in publications. Sentiment analysis, which is more common than mood state analysis, gives you information about whether a document is positive or negative. Detection of mood states (on top of sentiment) however enables you to look in a more advanced ‘beyond polarity’ way.

Mood states can have a predictive value as described by Bollen et al. Tension is often seen when something is about to happen as we demonstrated earlier for the release of the new iPhone 5. Looking at mood state ‘tension’ is an interesting factor to take into account when analyzing Buzz Reports for our clients.

So in all this online chatter we can actually find emotions, detect patterns and draw conclusions. Coca Cola does a great job with their commercials and succesfully connected their brand with the biggest event of the year. They have created a commercial that excites people and it can be measured.

Coca Cola claimed Christmas and people are looking out to their commercial as much as they look out to the holiday season. It’s almost as if people start to countdown to christmas only after they’ve seen the Coca Cola holiday commercial. Well… not almost as illustrated by this tweet:

Find out whether your brand excites people

Learn more about how BuzzTalk can be used by businesses and other organizations by downloading our free eBook. You can now use BuzzTalk and fire off an unlimited number of searches for as little as € 30 per user per month. Using decision support and analysis tool BuzzTalk you can learn about your brand, follow your competitors, detect hot topics in your industry, find mood states and relate them back to your campaigns and marketing efforts and much more.