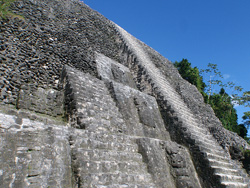 If you believe in the Mayan Calendar our world is going to end this year. However, if you believe we will still be there you may want to have some better means of predicting the future.

The web has come to reflect the world

Twitter has become very popular in the marketing world because of the potential it provides for viral marketing and webcare. Because of it’s enormous reach, Twitter is increasingly used by PR and news organizations to filter news updates through the community. Also Twitter is used to advertise products and services and to communicate news to stakeholders.

However, while monitoring of social media is not new, seeing into the future using social media is sizzling hot. It takes social media from the marketing department upwards to the executive level where business intelligence is needed to support decisions.

Several scientists have conducted research into how we can use big data such as the massive amounts of Tweets and other publications to make reliable predictions about the future. Their thought is that social media can be construed as a form of collective wisdom.

Earlier we mentioned the article by Johan Bollen et al. in which he and his team used Twitter to predict the stock market. In this blogpost we’ll feature the research done by Asur & Huberman of the Social Computing Research Group at HP Labs who, just like Bollen, used social media conversations as market predictor, only this time for box-office revenues.

The economics of attention: Predicting the future with social media

Asur & Huberman used the chatter from Twitter to forecast box-office revenues for movies. The reason for this is that the topic of movies is of considerable interest among Twitter users and real-world outcomes can easily be observed. Their hypothesis was that movies that are well-talked about will also be well-watched. As attention is scarce it’s logical to assume that the movie getting attention online will get attention and consumption offline.

They looked at 24 movies and considered 2.89 million tweets from 1.2 million different users. Using this data they constructed a linear regression model based on the tweet rate. Tweet rate is defined as the number of tweets for a specific movie divided by the time in hours. On basis of the rate at which people are tweeting they were able to project the revenue the movie was going to make two weeks ahead.

Once the movie opened they did a sentiment analysis of how people reacted with movies they saw to make even more accurate predictions. For this they used the P/N ratio which is the ratio of positive tweets to negative tweets.

Bernardo Huberman explains it in this video by Social Media Examiner:
.

Companies that use social media for business intelligence

What these scientific research teams are doing is all very sophisticated. But now businesses can tap into the wealth of online data and forward-looking insights.

In general from the way people are paying attention you can actually predict the success of your ideas. This has a wide range of applications from businesses (predicting product success) to even political (predicting elections).

You don’t have to have the budget of Hewlett-Packard or IBM to take advantage of this. BuzzTalk is an affordable software-as-a-service solution for companies and organizations that want to explore their world, tap into the wisdom of the crowd and gain valuable insights. BuzzTalk is an innovative business tool based on scientific research. This can take your business intelligence to new heights. Also, gathering information on how people talk about products and markets is very helpful when you’re about to design a new marketing and advertising campaign.